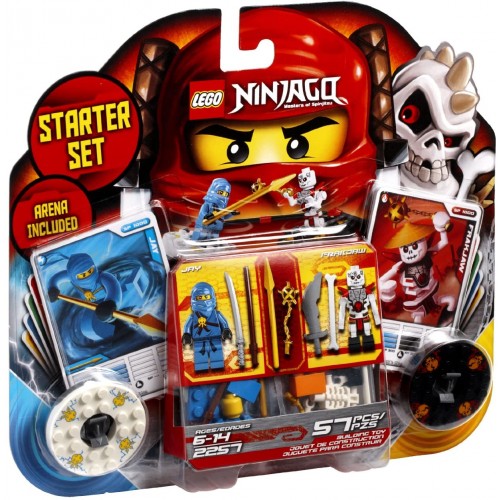 Amazon.com Become a Spinjitzu Master with the LEGO Ninjago Spinjitzu Starter Set. Featuring Jay, the Master of Lightning, and Frakjaw, a deadly Skeleton Army warrior, players can train and battle inside Master Wu’s ancient arena from the Mountains of Impossible Heights. Ninjas ages 6 to 14 can arm their character while using battle cards to foil their opponent or obtain special attacks. Be the last one standing, and you win! This set also includes spinners, character cards, and six weapons primed for spinning your way to glory. Spinjitzu Starter SetAt a Glance: Item #: 2257 Age: 6 to 14 years Pieces: 57 Jay Ninja of Lightening Weapon of Choice: Nunchucks Element of Color: Blue Strength: Speed Frakjaw Skeleton of Fire Weapon of Choice: Mace Ball Element of Color: Red Strength: Attack Features Jay and Frakjaw minifigures Use Spinjitzu to battle for ultimate victory in the arena. . LEGO Ninjago: Masters of Spinjitzu Four brave ninjas stand against the evil Lord Garmadon and his Skeleton Army–but those skeletons don’t stand a chance. Trained in the ancient martial art of Spinjitzu, Kai, Jay, Cole, and Zane must find the fabled golden weapons of Ninjago before Garmadon and his soldiers. Fight their enemies, travel through different worlds, and use the power of Spinjitzu to help our heroes battle against the forces of evil. Claim all 6 weapons for glory.. Spin Your Way to Glory The LEGO Ninjago Spinjitzu Starter Set lets you conquer your enemies with a twist of your fingers. Featuring two LEGO minifigures and spinners, you can challenge your friends to a fight of good versus evil as you launch Jay, Master of Lightning, against Frakjaw, from the dangerous Skeleton Army. Be the last ninja standing, and glory–as well as your enemy’s weapon–is yours for the taking. Arm Yourself with Cards and Weapons This set comes with six different weapons–including two golden weapons that allow you to play specific battle cards. Each of the eight cards features tricks that will either boost your attack or foil your opponent’s. Arm your character, choose your card, and spin to become the master of Spinjitzu. Build Your Own Training Arena The LEGO Ninjago Starter Set helps you test your aim and build your spinning skills. Though Master Wu may be on his own adventures, your character will feel right at home training and sparring in the Spinjitzu Arena. Change the size of your practice field, or take the pieces along when you host the next battle. Look Online to Help Your Spinning Techniques Your strength, smarts, and courage can help defeat enemies everywhere–but even the best ninja needs practice. Use the included LEGO bricks to give your spinning skills a new edge. Look on the LEGO Ninjago website for tips on locking a spinner, aiming, and finding your own unique fighting style. What’s in the Box LEGO Ninjago Spinjitzu Starter Set with 2 minifigures (Jay and Frakjaw), 2 spinners, 6 LEGO bricks, 6 weapons, 2 character cards, 8 battle cards, and arena pieces. From the Manufacturer Spin your way to victory and become a Spinjitzu master! Build the Spinjitzu Arena, pick your character and play the cards to influence the outcome between Jay, the Master of Lightning, and Frakjaw, the toughest warrior in the Skeleton Army. Set includes 2 LEGO minifigures, 2 spinners, 6 weapons, 2 character cards, 8 battle cards, and enough LEGO bricks to make the Spinjitzu Arena. 2 minifigures 2 spinners to increase your strength; smarts and courage 6 weapons to boost your attack and 6 LEGO bricks to give your spinning skills a new edge Also includes 2 character cards, 8 battle cards and LEGO bricks 57 elements