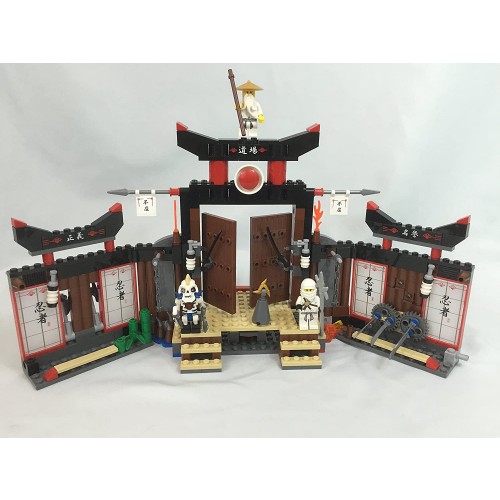 Amazon.com The forces of evil never rest in the LEGO Ninjago Spinjitzu Dojo. Zane, Master of Ice, is training with Sensei Wu when General Nuckal of the Skeleton Army tries to steal the valuable Shurikens of Ice. Ninjas 7 through 14 can pit good against evil as Zane and Sensei Wu do battle against Nuckal around the expansive dojo. Can Zane prove to his sensei that he has what it takes to become a true Spinjitzu Master, or will Nuckal escape with the weapon–and the glory? Spinjitzu DojoAt a Glance: Item #: 2504 Age: 7 to 14 years Pieces: 373 Sensei Wu Spinjitzu Master Weapon of Choice: Wisdom Element of Color: All Strength: Power of Creation Zane Ninja of Ice Weapon of Choice: Shuriken Element of Color: White Strength: Stealth General Nuckal Train to become a trueSpinjitzu Master. . Features Zane, General Nuckal, andMaster Wu minifigures. . LEGO Ninjago: Masters of Spinjitzu Dodge the falling axes. . Four brave ninjas stand against the evil Lord Garmadon and his Skeleton Army–but those skeletons don’t stand a chance. Trained in the ancient martial art of Spinjitzu, Kai, Jay, Cole, and Zane must find the fabled golden weapons of Ninjago before Garmadon and his soldiers. Fight their enemies, travel through different worlds, and use the power of Spinjitzu to help our heroes battle against the forces of evil. Test Your Skills in the Dojo LEGO’s Ninjago Spinjitzu Dojo places you on the Mountains of Impossible Heights at the Monastery of Spinjitzu. At over 7 inches tall and 15 inches wide, the dojo provides everything your ninja will need to master the art of Spinjitzu. As you train with Sensei Wu, you’ll encounter exploding floorboards, moving doors, and even a snake pit. Help Zane leap between the falling axes and dodge the shooting spears as he moves through the dojo. Includes the Golden Shurikens of Ice.. Fight to Keep the Shurikens of Ice Create the ultimate battle as Zane and Sensei Wu fight to keep the Shurikens of Ice safe from General Nuckal. Launch Sensei Wu into action with his white spinner, or help Zane navigate the dojo obstacles to reach the Shurikens first. Nuckal may be part of the dreaded Skeleton Army–but he’s no match for these two Spinjitzu masters. This set comes with four different weapons–including the golden Shurikens of Ice that allows you to play specific battle cards. Each of the four cards features tricks that will either boost your attack or foil your opponent’s. What’s in the Box LEGO Ninjago Spinjitzu Dojo set with 3 minifigures (Sensei Wu, Zane, and General Nuckal), 1 spinner, 4 weapons, character card, 4 battle cards, and Spinjitzu Dojo. Skull Motorbike Ice Dragon Attack Turbo Shredder Spinjitzu Dojo Garmadon’s Dark Fortress From the Manufacturer Sensei Wu is training his apprentice, Zane, at his secret dojo when suddenly they spot General Nuckal trying to steal the Shurikens of Ice. Can Zane prove to Sensei that he has what it takes and use his Spinjitzu abilities to get past the obstacles to defeat their evil adversaries? Includes Sensei Wu and Zane minifigures and General Nuckal figure Set includes spinner, 1 character card, 4 battle cards and 4 weapons Dojo features exploding floorboards, moving obstacles, pit of spikes, fire pit and opening doors Approximately 15 long 373 elements