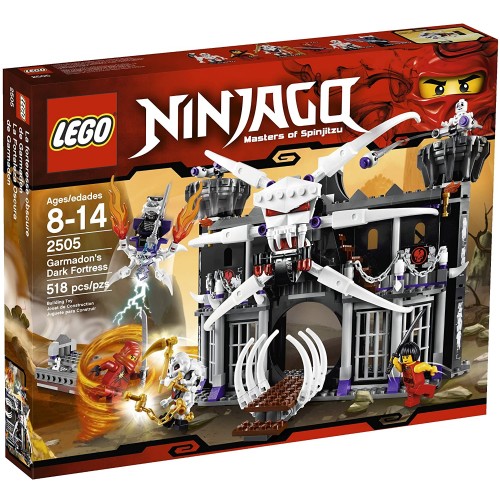 Amazon.com Create the ultimate battle with LEGO Ninjago Garmadon’s Dark Fortress set. Samukai of the Skeleton Army has taken three of the golden weapons back to Garmadon’s lair in the Underworld. Guarded by Bonezai, Chopov, and Lord Garmadon himself, these weapons lie deep in the fortress. But not for long–Kai and Nya know just how to use their Spinjitzu skills to get them back! Ninjas 8 through 14 can help our heroes survive spiders, missiles, and spinning towers in order to reclaim the ancient weaponry. Garmadon’s Dark FortressAt a Glance: Item #: 2505 Age: 8 to 14 years Pieces: 518 Kai , Ninja of Fire Nya Lord Garmadon Samukai Bonezai , Skeleton of Ice Chopov , Skeleton of Earth Find the golden weapons hidden inLord Garmadon’s Dark Fortress. . Includes removable throneand attack spider. . LEGO Ninjago: Masters of Spinjitzu Four brave ninjas stand against the evil Lord Garmadon and his Skeleton Army–but those skeletons don’t stand a chance. Trained in the ancient martial art of Spinjitzu, Kai, Jay, Cole, and Zane must find the fabled golden weapons of Ninjago before Garmadon and his soldiers. Fight their enemies, travel through different worlds, and use the power of Spinjitzu to help our heroes battle against the forces of evil. Navigate the fortress traps.. Activate the trick grave and surprise your enemy. . Build the Ultimate Battle for the Golden Weapons Let the epic battle between good and evil begin with LEGO Ninjago Garmadon’s Dark Fortress. Kai, Master of Fire, and his friend Nya must infiltrate the deadly Dark Fortress of Lord Garmadon in order to retrieve three of the golden weapons kept hidden there. But it won’t be easy–standing in the way are Samukai, Bonezai, Chopov, and the powerful Garmadon himself. With three levels of obstacles and traps, this 10-inch-tall fortress might be more than a match for our heroes. Only after you make it through can you take back the Shurikens of Ice, the Golden Scythe, and Nunchucks of Lightning and return them to the Spinjitzu Dojo. Survive the Fortress Obstacles Help Kai and Nya navigate through the treacherous obstacles that fill the Dark Fortress. Escape the ejecting spiders, dodge the flick-fire missiles, and keep hidden from the spinning towers topped with members of the Skeleton Army. Be careful–even if you evade the trick grave and moving throne, you still have to defeat Lord Garmadon. His primary weapon is the power of deceit, and he wields it very well. What’s in the Box LEGO Ninjago Garmadon’s Dark Fortress set with 6 minifigures (Kai, Nya, Garmadon, Samukai, Bonezai, and Chopov), 5 weapons, and Dark Fortress with removable spider and throne. Skull Motorbike Ice Dragon Attack Turbo Shredder Spinjitzu Dojo Garmadon’s Dark Fortress From the Manufacturer Samukai has taken three of the golden weapons back to Garmadon’s Underworld castle, and it’s up to Kai and Nya to get them back. But before they battle their evil Skeleton enemies, they need to get past the castles defenses, including flick-firing missiles and a huge spider. Let the battle between good and evil commence! Includes Kai and Nya minifigures and Garmadon, Samukai , Bonezai and Chopov figures Shurikens of Ice, Golden Scythe , Nunchakas of Lightning, black sword and silver sword included Garmadon’s fortress features ejecting spider and grave, flick missiles, tower prisons and moving throne Approximate dimensions 10.5 long and 9.5 high 518 elements