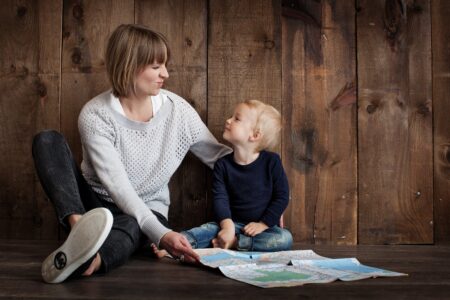 When it comes to building the confidence of our children, we often think about how we should talk to them or what we should say. But did you know that how you behave has a big influence on your children too? Even when kids are very little they start copying their parents’ behavior. This means that if we want our kids to be confident and feel good about themselves, then we need to set the best example for them. And here are 12 things we can do today:

It makes sense that if your focus is on your child’s positive points, then this is what he or she will concentrate on. If you’re always pointing out your child’s mistakes and weaknesses (even if you do this kindly), then these are the things he or she will think most about.

2) Nod, smile and make eye contact when your child speaks

When people speak, we naturally nod our heads to show that we are listening. But children can sometimes feel ignored by adults who don’t actually acknowledge them while they are speaking. Not only does it shut down communication between parent and child, but it also sends the message that the child’s opinion doesn’t matter. And this isn’t something that just happens with one-to-one communication either – it can happen when a child is trying to get the attention of a group of adults at once. In this case, it really helps if one adult in particular shows that he or she has been listening by making eye contact and smiling from time to time while the child speaks.

3) Laugh at your child’s jokes

In our house, we say that my husband has “the laugh.” And I mean this literally – every time my 5-year-old tells a joke, he says it in exactly the same way and then waits for his dad’s response. If dad laughs, then all is well in world! But if he doesn’t laugh? Well let’s just say life isn’t so simple… So why do kids love it so much if their parents laugh at their jokes and enjoy their company? Because when we show our kids that we like them, they feel safe and happy around us – and this also gives them the message that they are lovable.

Children love it when we treat them nice (who doesn’t?) But what’s most important for building self-esteem is treating your child with respect even when my child does something wrong. Instead of punishing him or her in public, wait until you can talk privately to discuss what happened. And remember: What looks like misbehavior might be a sign that there is something going on in his life and this needs understanding and support.

When our children are little, we often give them the impression that we own them. We protect them from danger and teach them what they can play with and eat. But as they get older, it’s important for their self-esteem that they start learning how to make decisions for themselves – even when these decisions mean saying “no.” So this is something you could do together: When you’re at the store or out somewhere else where your child might want to buy or try something new, help him or her practice saying no in a kind way. For example: “I’m not ready to buy anything yet” or “No thank you – I’m not hungry.”

Again, this doesn’t only apply to children. We all want responsibility – because it gives us a feeling of being in control and powerful. But we don’t always like the negative consequences that come with responsibility. So the challenge is to help our kids learn how they can accept responsibility when things go well and also when things don’t work out so great (because nobody’s perfect). For example: You might say: “It was wrong to hit your brother” or “You’re right – it wasn’t very nice what you did there.” Then ask her openly if she feels bad about what happened. Kids who feel respected and understood when mistakes are mentioned are more likely to take responsibility.

7) Encourage your child to think for herself

We all want our kids to be smart and well-educated, but there is one thing that’s even more important: Having the ability to make their own decisions – whether it’s about what clothes to wear or how they should solve a problem with a friend. So instead of telling your daughter which sweater she should buy, you might say something like “What do you think?” This will help her learn confidence in her own opinions. And the good news is that this doesn’t just give children self-confidence – research has actually shown that critical thinking can influence success at school.

The world is constantly changing and we can’t stop that. All we can do is try and prepare our children so they feel safe and secure while we go through challenging times. For example: When you’re expecting a new baby, it helps to explain this before the birth so your kids know what to expect. You could say things like: “Daddy and I are going to bring home a baby brother” or “We’ve decided that we want to adopt a little girl.” It’s also important not just to talk about big changes but small ones too – such as moving house, switching schools or even losing a favorite toy. This way, your child will get used to the idea of change and won’t be surprised when it happens.

Every day we have opportunities to teach our children how to take responsibility for their choices. The trick is not to do it all on their own but help them figure out what could happen if they don’t think before they act. For example: If you see that your son doesn’t start getting ready for school on time, you can sit down with him and together try and figure out why this happens. After a discussion it might come out that he spends too much time playing outdoors with his friends in the morning instead of getting ready quickly. Now comes the hard part but also the best part: You let him solve the problem himself – either by finding new friends to play with or by setting his alarm clock a little earlier. You can even cheer him on and say things like: “I bet you’ll be ready in time tomorrow.” But make sure you follow through and check if he did it. And don’t forget to give lots of praise when he gets it right!

Kids need stability – especially when their parents divorce. So they tend to “split” their loyalties and feel connected to each parent at the same time. This doesn’t mean that one is more important than the other but simply that both parents are loved equally (and your kid wants both of them in her life). So respect this connection between your daughter and her other parent by not being negative about them. This will help your daughter feel safe and secure as she goes through a difficult transition. And try to have as many positive conversations with your child as you can so she learns what love is – even if there’s a lot of conflict going on between the two parents.

One of the most important skills we can give our kids is helping them understand how others might be feeling. So instead of just telling them to be polite, explain that it feels good when someone says please or thank you because it shows that they were listening. You could also explain that people often need different things from each other depending on the situation (like sometimes I want to be left alone and sometimes I want you to play with me). And if your child feels bad when he sees someone else unhappy, explain that this is called empathy – it’s a feeling of shared understanding. If your son does something that hurts another person, talk about the mistake he made and how he can deal with his guilt by apologizing.

12) Learn from your mistakes as a parent

As a parent, we always try our best but we know we’ll make mistakes along the way. Admitting this takes away some of the pressure on our kids to “be perfect” all the time because they see their parents as human beings who are capable of screwing up too! So think before you so you don’t say things in front of your daughter that she’ll have to apologize for later. And when you do make a mistake, own up to it and explain what’s happened so she doesn’t think all adults are unreliable. Remember, even if there are some bumps along the way, every parent has the ability to love unconditionally – no matter what kind of mistakes he or she makes!