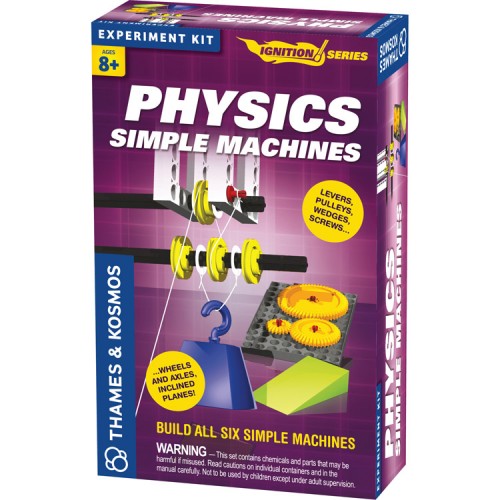 Buying Options
Estimated delivery
1 to 3 business days
Expedited delivery available.
Albert Einstein, Isaac Newton, Stephen Hawking, Galileo Gallilei, and every other great physicist each shared a common trait: they had an understanding of the basic of their discipline. The basics of physics can be found in the study of simple machines: machines that use the laws of nature to complete a task. Young scientists can learn about these simple yet complicated devices through the Simple Machines Physics Science Kit by Thames and Kosmos. Your children can establish a foundation in physics by building models of all six simple machines: levers, pulleys, inclined planes, screws, wedges, and wheels and axles. After establishing a solid foundation in physics by building simple machines, young physicists can build and use a spring scale to measure how the machines change the direction and magnitude of forces, making work easier to do. Kids can dive into the world of physics with the hands-on Simple Machines Physics Science Kit from Educational Toys Planet!
Related: Gross Science Lab Kids Science Kit