Maisy is back from Spain! 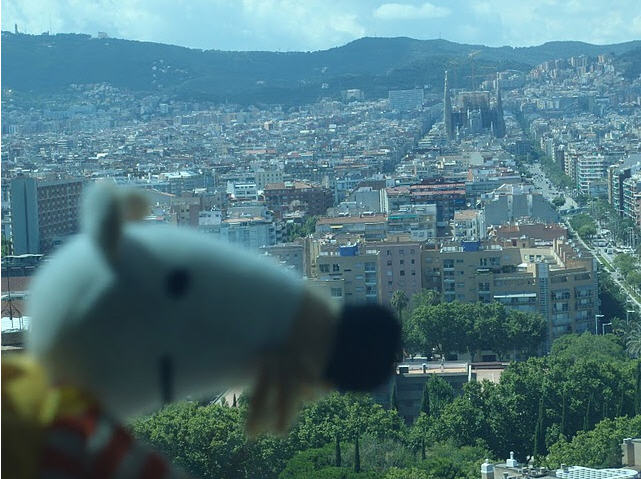 Maisy is finally back from his vacation in Barcelona (if you are not familiar with our little traveler, read more at Maisy is going to Barcelona, Spain)! And, looking at his pictures, we can see that it surely was something remarkable. Thanks to our truly amazing neighbor, Maisy and us learned a lot about Barcelona! My son came up with all kinds of questions about things he wanted to learn about, and here is what we found out from Maisy’s diary: 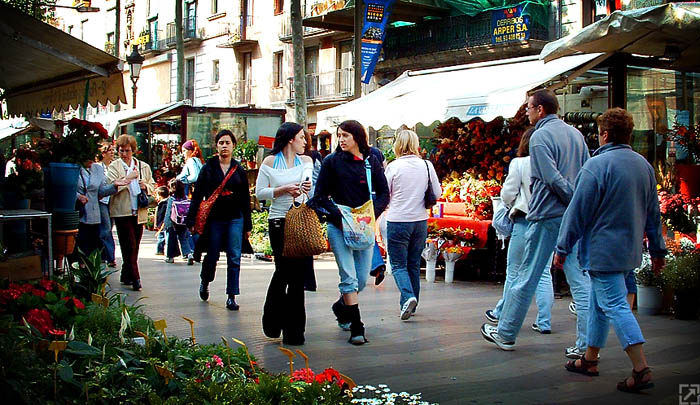 The two languages spoken in Barcelona are Spanish and Catalan. 5 billion people live in Barcelona: it is 6th most populous city in Europe.

How do people dress?
Just like people at home in the USA

What’s the weather like in there?
The summer was beautiful, warm and sunny. Winters are chilly enough for overcoats, but never freezing. 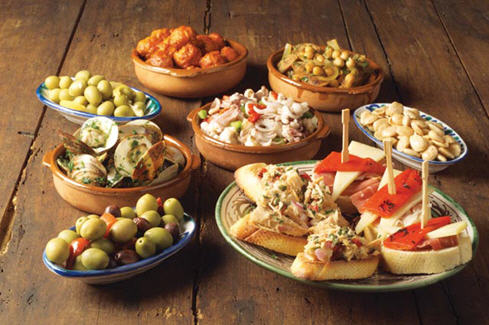 What are favorite foods here?
Lots of seafood and tapas (little sandwiches with meat, fish, etc)

We went to the Mercat de La Boqueria, where they sold fresh meats, fruit, eggs, nuts, veggies and seafood. It was a cool place to visit.

We walked along Passeig de Gràcia, which is like our 5th Ave in Manhattan – very expensive shops can be found there.

What was your transportation?
Metro and taxi

What monuments/museum did you go to? How it was made/built? Who made/built it?
We saw many beautiful places in Barcelona.

We went to Castell de Montjuic which overlooks the City of Barcelona. The view was out of this world! 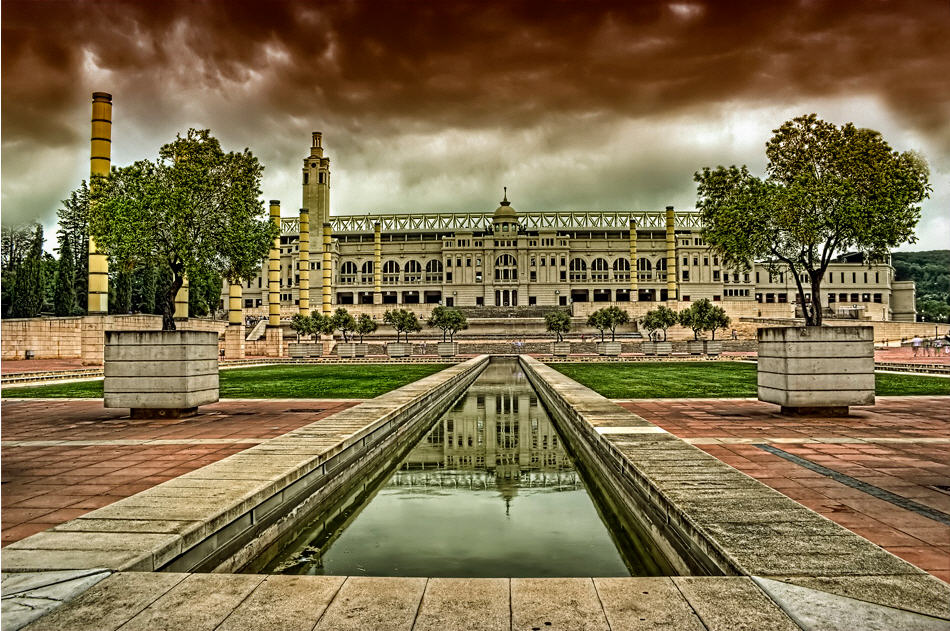 Estadi Olimpic: Originally built for 1929 Exhibition, it was the major stadium for the 1992 Olympic Games.
.

What language people speak there?
We also saw the Olympic Stadium (1992). Now they use it for concerts. Jon Bon Jovi played there on a Wednesday night. He was also staying in our hotel, but we didn’t see him. 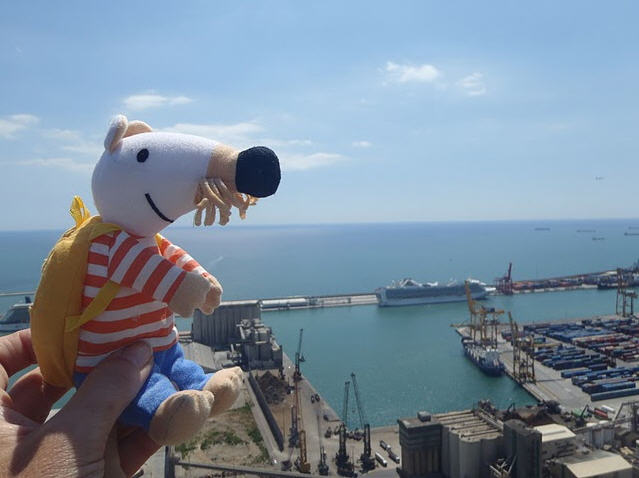 We stayed at Port Olympic – right on the sea. The marine had many terrific looking boats. People liked to walk on the path along the sea. You can find many places to eat there and places for adults to dance. 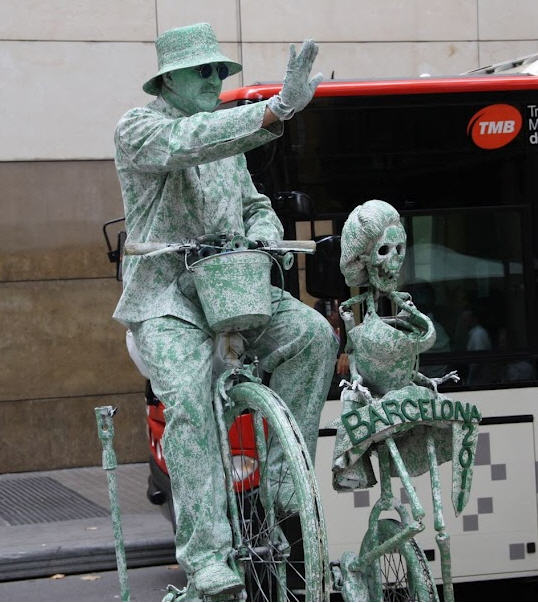 We walked down the La Rambla where you can find artists drawing and painting. There were people selling small animals – birds and others selling plants and flowers. It divides in 3 sections. Also you can find street performers – they stood still like statues.

At the foot of the Rambla is the Columbus monument

There is a huge monument made in honor of Christopher Columbus at the port – we have pictures!

The Monument a Columbus was established in honour of the discoverer of America, Christopher Columbus. There is a ~60 meter high elevator ride to the viewing platform with a beautiful view of the Ramblas, the yachting port of Barcelona in Port Vell and shopping centre Maremagnum. 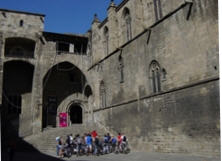 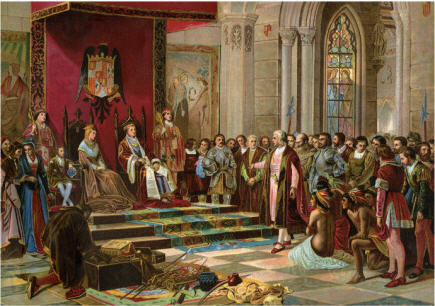 We were at a place where Christopher Columbus was – the inside square of a castle.

Gothic Quarter & Placa Del Rei
With portions surviving from the Middle Ages, the Gothic Quarter remains a vibrant neighborhood. Walking up the Carrer del Carme, east of Les Rambles. The Placa Del Rei, within Gothic Square, is the Quarter’s oldest, loveliest part. Even though evidence indicates otherwise (with the royal couple summering elsewhere), stair steps within the corner of the square are widely believed to be where King Ferdinand and Queen Isabella received Christopher Columbus on his triumphant return from the New World in 1493. 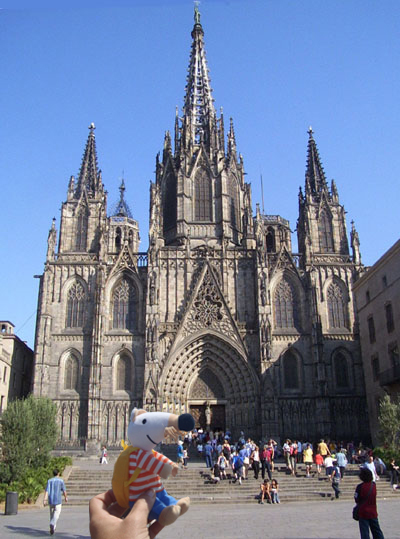 The Cathedral of Barcelona was beautiful!

La Catedral: Cathedral of the Holy Cross and Saint Eulalia
This impressive Catalan Gothic church, begun in 1298 is built on the site of a Roman temple and houses the tomb

We saw the outside of a stadium where they have bull fights.

Naturally, we had to see one of the most famous places in Barcelona – Sagrada Familia – what an interesting place! Gaudi was the artist. The building isn’t complete. They hope for it to be finished by the 100th anniversary of his death.

The carving of the donkey, which decorates the main portal of La Sagrada Familia was created from life. According to Albert Schweitzer in his book Out of my Life and Thought, Gaudí was presented with the finest donkeys in Barcelona to use as his model but rejected them in favour of an old, broken down beast that belonged to a woman selling sand.

Paco also took us to Parc Guell which Gaudi was commissioned to build for a very rich man. (There are a few pictures of me there). Mosaic tiles, everywhere!! Oh, it is a park.

Architects Antoni Gaudí and Lluís Domènech i Montaner, artists Salvador Dali, Pablo Picasso, Joan Miro, and many others lived and worked in Barcelona.

This building is an office – at night it is a pretty blue – all lit up! 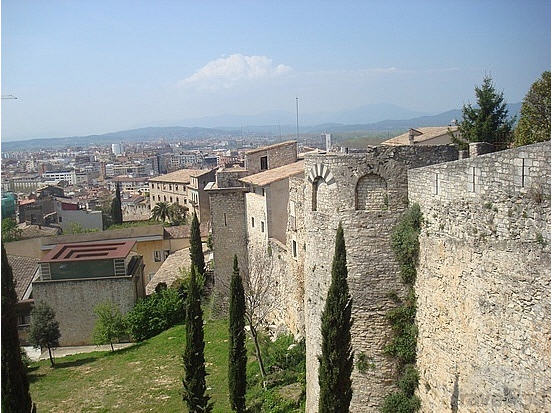 Girona is a city which brims with history, having endured many sieges and been captured seven times by various invading nations.

We also traveled to Girona and Costa Brava. While in Girona we saw the walls that were built to protect the people inside. There were beautiful cathedrals too. The city naturally was made of stone, the walls and the streets. The coast line in Tossa de Mar was breathtaking. We saw people jumping off cliffs into the sea. There also was a high stone wall to protect the people of the cit from others who wanted to invade it. The colors of the sea were green and blue!

Maisy was very well behaved. He was fun to have along!

Some fun Facts about History of Barcelona: