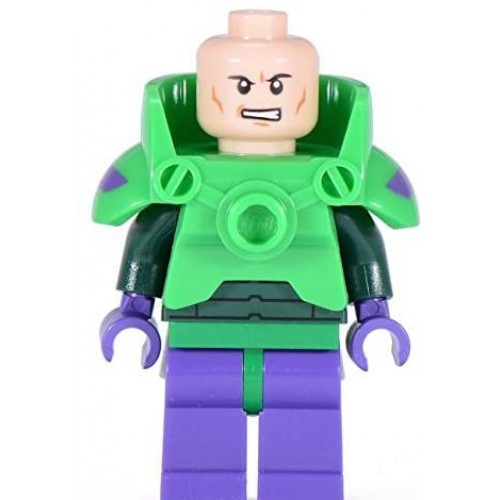 30164 Lex Luthor is a Super Heroes set that was released in June 2012 as a pre-order bonus with the purchase of the LEGO Batman 2: DC Super Heroes video game. This is a small, polybag set of a highly collectible, rare minifigure. Description: The set consists simply of three black bricks stacked atop each other, and a Lex Luthor minifigure. The minifigure has purple legs, green hips, a dark green torso, and purple hands. He wears green armour with purple stripes on it, and has a flesh-coloured face with a confident expression. He wields a large weapon (the Deconstructor), which has a large green Kryptonite crystal mounted on the back, and a green circle part, a stick, and a light green crystal on its front. Background: The set is based on LEGO Batman 2: DC Super Heroes, and features Lex Luthor in his Power Armour, and armed with the Deconstructor, which he can use to destroy any shiny black objects, three of which are seen in the set. LEGO Lex Luthor minifigure with accessories polybag! Lex’s armour piece is only seen in green and purple in this set! Lex has a different head in this set then the one his normal variant uses! Add to your DC Comics LEGO Minifigures collection! LEGO Set #30164, 17 pieces. Ages 6-12. Released June, 2012 as a promotional for the Lego Batman 2 video game.