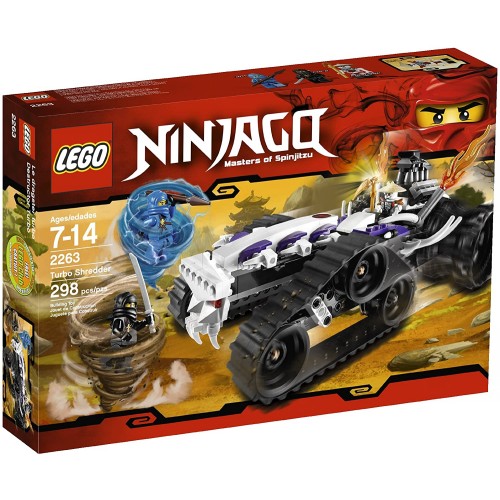 Amazon.com Spin out of danger with the LEGO Ninjago Turbo Shredder. Frakjaw, Skeleton of Fire, is trying to escape with the Golden Scythe–but Spinjitzu masters Jay and Cole won’t let him get away! Ninjas 7 through 14 can help our heroes avoid being swallowed up by the Shredder’s snapping jaws. Dodge the tracks, snag the scythe, and use the power of Spinjitzu to make your escape. Turbo ShredderAt a Glance: Item #: 2263 Age: 7 to 14 years Pieces: 223 Jay Ninja of Lightening Weapon of Choice: Nunchucks Element of Color: Blue Strength: Speed Cole Ninja of Earth Weapon of Choice: Staff Element of Color: Black Strength: Defense Frakjaw Skeleton of Fire Weapon of Choice: Mace Ball Element of Color: Red Strength: Attack Avoid the deadly-looking Shredder as you battle the Skeleton Army. . Features Jay, Cole, and Frakjaw minifigures. . LEGO Ninjago: Masters of Spinjitzu Four brave ninjas stand against the evil Lord Garmadon and his Skeleton Army–but those skeletons don’t stand a chance. Trained in the ancient martial art of Spinjitzu, Kai, Jay, Cole, and Zane must find the fabled golden weapons of Ninjago before Garmadon and his soldiers. Fight their enemies, travel through different worlds, and use the power of Spinjitzu to help our heroes battle against the forces of evil. Includes the Golden Scythe of Quakes.. Jaws move to snap up your enemies. . Reclaim the Golden Scythe from Frakjaw The LEGO Ninjago Turbo Shredder might be used for evil, but it’s no match for the Spinjitzu masters. Frakjaw has stolen the golden scythe for his master, Lord Garmadon, and is riding away on his Shredder to the Underworld. Help Jay, Master of Lightning, and Cole, Master of Earth, use their skills to attack Frakjaw and reclaim the ancient weapon. With its massive, detailed engine and shooting exhaust flames, this vehicle is 10 inches of pure ninja destruction. Escape the Shredder’s Deadly Jaws To reach the golden weapon, Jay and Cole must first get past the Shredder itself! Its primary weapon lies in the deadly jaws that move up and down to snag and swallow enemies of Garmadon. Dodge this danger, and you still have to avoid the large tracks that threaten to mow down anything–and anyone–in its path. What’s in the Box LEGO Ninjago Turbo Shredder set with 3 minifigures (Jay, Cole, and Frakjaw), 3 weapons, and Turbo Shredder. Skull Motorbike Ice Dragon Attack Turbo Shredder Spinjitzu Dojo Garmadon’s Dark Fortress From the Manufacturer Frakjaw is escaping with the Golden Scythe in his Skull Dragster, so Sensei Wu has sent Jay and Cole to recover it. Help our fearless heroes use Spinjitzu to avoid being swallowed up by the Dragster and grab the golden weapon! Includes Jay and Cole minifigures and Frakjaw skeleton figure Golden Scythe, silver sword and brown spear included Turbo Shredder features moving jaw and massive engine Rotating tracks and exhaust flames 298 elements