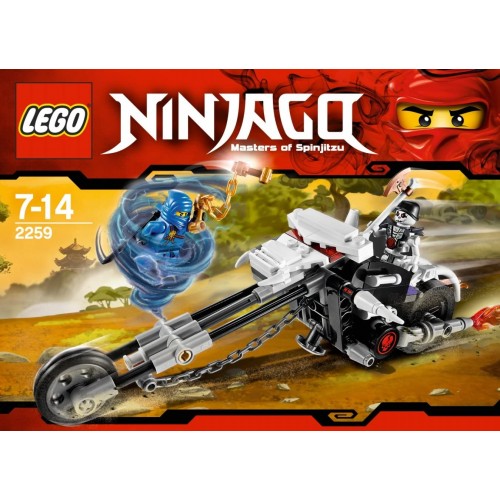 Product description Chopov is escaping with the Nunchucks of Lightning and Sensei Wu has sent Jay to stop him. Can he use his new-found skills to avoid the bike’s Ninja swat defense and retrieve the Nunchucks? Part of the LEGO Ninjago collection. Amazon.com Battle for weapons and glory with the LEGO Ninjago Skull Motorbike. Chopov is escaping with the Nunchucks of Lightning on his motorbike–but Jay is right behind him! Ninjas 7 through 14 can launch good against evil as they help Zane use his Spinjitzu skills to avoid the bike’s deadly flames and retrieve the Nunchucks. Will Chopov speed away with the victory, or can Zane use his lightning abilities to strike fear into the heart of evil? Skull MotorbikeAt a Glance: Item #: 2259 Age: 7 to 14 years Pieces: 157 Jay Ninja of Lightening Weapon of Choice: Nunchucks Element of Color: Blue Strength: Speed Chopov Skeleton of Earth Weapon of Choice: Machete Element of Color: Black Strength: Defense Motorbike flings your enemy using itsninja swat attack. . Features Jay and Chopov minifigures.. LEGO Ninjago: Masters of Spinjitzu Four brave ninjas stand against the evil Lord Garmadon and his Skeleton Army–but those skeletons don’t stand a chance. Trained in the ancient martial art of Spinjitzu, Kai, Jay, Cole, and Zane must find the fabled golden weapons of Ninjago before Garmadon and his soldiers. Fight their enemies, travel through different worlds, and use the power of Spinjitzu to help our heroes battle against the forces of evil. Includes the Golden Nunchucks of Lightning. . Battle Chopov for the Nunchucks of Lightning LEGO Ninjago Skull Motorbike lets you test your Spinjitzu skills on the road. Chopov, Skeleton of Earth, is driving back to the Underworld with the Nunchucks of Lightning–but Zane, Master of Lightning, won’t let him get far. Arm Zane with his black sword and help him in his battle against Chopov as he tries to dodge the motorbike’s flames and unseat the dangerous skeleton. Launch the Motorbike’s Swat Attack At over 11 inches long, the Skull Motorbike is every bit as deadly as its namesake. With flames blazing from the motorbike’s tailpipes, you can make your escape or activate the bike’s ninja swat attack and launch your opponent back to the Underworld. Whether you fight on the side of good or evil, the Skull Motorbike is an asset to any ninja. What’s in the Box LEGO Ninjago Skull Motorbike set with 2 minifigures (Zane and Chopov), 3 weapons, and Skull Motorbike. Skull Motorbike Ice Dragon Attack Turbo Shredder Spinjitzu Dojo Garmadon’s Dark Fortress bBattle Chopov to retrieve the nunchucks of lightening!