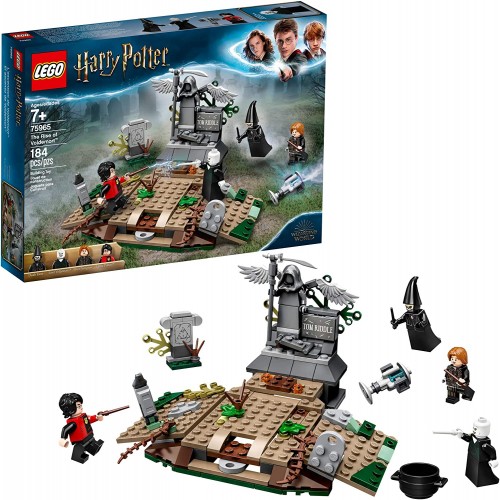 Theres magic, adventure and action with LEGO Harry Potter 75965 The Rise of Voldemort. In this iconic scene from Harry Potter and the Goblet of Fire, Harry is trapped on Tom Riddles tombstone in a spooky graveyard. The deceitful Peter Pettigrew mixes a potion and, with the pull of a brick leverLord Voldemort magically appears. After summoning a Death Eater, Voldemort releases Harry and they start to duel. This gift for kids is full of spells, surprises and spectacular battlesso young witches and wizards will need all their Defense Against the Dark Arts skills to help Harry escape! This set depicts the exciting scene in Little Hangleton graveyard, where Voldemort magically appears to battle Harry Potter, who has been trapped there by Peter Pettigrew Includes 4 minifigures: Harry Potter minifigure with wand and Triwizard tournament costume, Lord Voldemort with wand, Peter Pettigrew with wand and a Death Eater When the brick lever is pulled, Voldemort rises up from a hidden compartment beneath the surface of the graveyard, summons a Death Eater, and sets about dueling with Harry Kids can recreate the iconic scene from Harry Potter and the Goblet of Fire where Lord Voldemort returns, then combine it with other original LEGO sets and LEGO bricks for endless creative play This LEGO Harry Potter set measures over 3-inch (10cm) high, 6-inch (17cm) wide and 5-inch (14cm) deep, providing space for young witches and wizards to make full use of the buildable set’s awesome features