Having a BLAST learning: mentos and diet soda science experiment

Dropping a little white sweet candy into a big dark bottle of coke produces one of the most exhilarating effects: a big and watery explosion. Two mentoes – bigger explosion. Five – ogogogo! Behold and step back! With absolute certainty I can say that this science experiment was definitely a blast: mentoes make a myriad of memories and create a monumental momentum! Mentoes and diet coke rule – that’s my kids conclusion. One bottle. One pack of candy. And a little bit of science to it too? Mesmerizing!

Did I mention a pack of Mentos candy and as many bottles of diet coke as many explosions you’d like to create?

This is not the first time we are indulging ourselves with this experiment, so I threw one new item into the mix that made all the difference: a Geyser Tube that I picked up at Michaels. The tube included another pack of candy. With a phone flashed coupon it came to about $4-5. Coke? I never buy one, so I had no idea: 3 2-litter bottles for $5. We also tested Diet Ginger Ale (2l) vs Diet Ginger Ale small bottle.

So, to add a scientific element to our explosions we tested… Does size matter? A few different sized bottles to see the difference in effect Does brand matter? Coke vs Ginger Ale Does flavor make a difference? We had three different flavored packs of Mentoes. How does temperature affects the explosion? We put a bottle in a fridge for an hour; one was room temperature; one – held under the running warm water for 5-10 minutes. What is going on?! Yep, the scientific reasons why this explosion is taking place was on a table.

How is the Experiment Conducted:

A group of leading scientists in this field gathered in an outside facility. (noisily stumped into the backyard) All testing materials were neatly and accurately lined up for the experiment. (Bottles, Mentos, geyser tube got pushed around quite a bit) 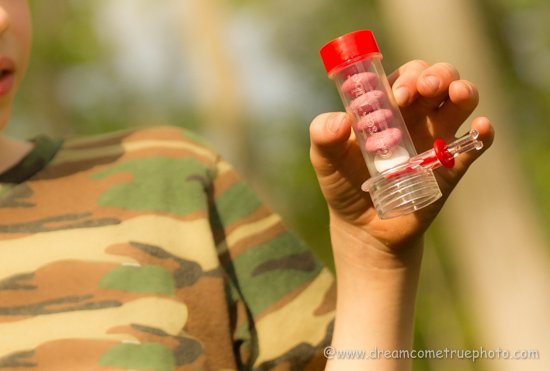 Testing protocols were established. (argued a bit whose turn it is, which candies to add first, what bottles go first/last etc) Using vigilant scientific observational methods, each of the substances was vigorously tested. (Mentos dropping, bottles exploding – really, the best part!) Detailed records were kept during the experiment. (Mom got to play with the camera trying to get the pictures of the amazing fountains reaching the sky) Results were measured with a precision of top scientific tools. (Our height reference – the roof of the house – turned out to be too We had to switch to a nearby tree for that; counting branches did the trick).small!

Ground-breaking conclusions opened the doors to new discoveries. (The most unexpected and fun part of the experiment happened when one of the mentos got stock in the neck of the bottle, resulting in a hilarious all around fountain as opposed to a strong upward geyser splash. Result – most giggles.) 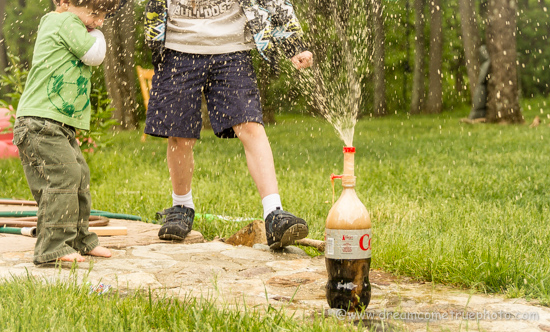 Despite the strict safety measures in place, a great personal risk had to be undertaken to succeed with the experiment. (While nobody got obscenely wet, with so much excitement spanning over the next few days, we managed to miss a schoolbus on one of the mornings when we were busy with our scientific explorations. Planning such experiments after school is quite an obvious bit of wisdom).

What’s going on: coke bottles, ginger ale, other sodas have carbon dioxide added as the last step of their bottling up process (yep, the tiny bubbles scratching the throat as we are drinking it). When the bottle is opened, the carbon dioxide gas escapes. Water molecules like to be next to other water molecules, so if something separates them, more carbon dioxide bubbles can form. Having any object added (candies), speeds up the reaction. Since the surface of Mentos are very rough, covered with tiny pores and contain gum arabic, a surfactant, it helps to disrupt the water molecules, form more carbon dioxide bubbles. Mentos are heavy, they fall down quickly, intensifying the gas escaping process along the way, stimulating such an impressive splash. Size: does matter! The bigger the bottle, the more carbon dioxide, the bigger the explosion! Brand: diet coke works the best. Diet is the key. Weather the coke has/doesn’t have caffeine – doesn’t matter. Mentos Flavor: haven’t noticed any difference. Mint, strawberry, berry, anything goes. Temperature: makes a HUGE difference! The warmer the bottle, the more movement there is inside between the molecules, the more carbon dioxide, the faster it escapes, the cooler/taller fountain you are about to witness! Fun fact: actually, as the bottles were being packaged at the factory, the liquid inside was chilled prior to adding carbon dioxide to be able to add more… and not to create a big messy splash before the cap is added on.

Such experimentation can provide multiple uses: