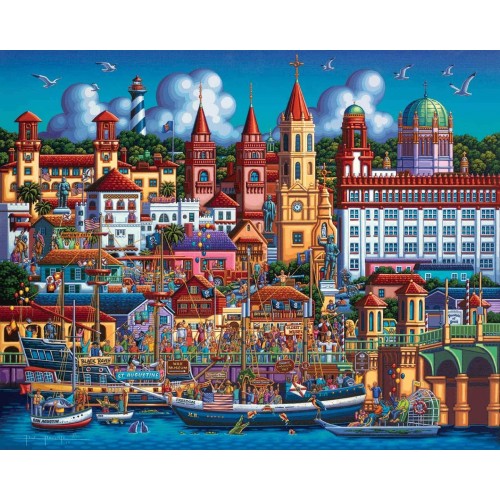 Saint Augustine was founded 1565 before the Pilgrims even landed up in Massachusetts. Spanish conquistador, Pedro Menndez de Avils founded the city and established a colony for the country of Spain. Some years later, enemies of Spain and pirates invaded, and after a seven year war with the Treaty of Paris in 1763, Spain ceded the area known as Florida to Great Britain, and St. Augustine became a haven for loyalists during the American Revolutionary War. In the second Treaty of Paris in 1783, Florida was ceded back to Spain, however, the United States considered Florida to be of great importance to its interests as it expanded its territory in North America. In 1819, with the Adams-Ons Treaty, Spain ceded Florida to the United States. In modern day, St. Augustine is a tranquil place to enjoy with its year-round mild climate, perfect for family fun and adventure. Experience the beauty of early mornings as shops come alive with tourists and locals while they set out to explore. Each puzzle has a colorful story to tell Fun and entertaining items are found within the intricate details of the artwork Full color image insert with extra zip-lock baggie Re-closable collectors box with sleeve Made in America from high quality materials