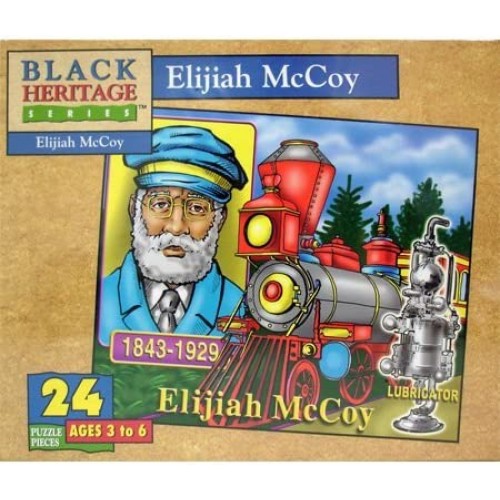 Black Heritage Series. 1843-1929. Elijah McCoy was born in 1843. He had 11 brothers and sisters. His parents were runaway slaves. They used the Underground Railroad to escape from the South. As a teenager, Elijah dreamt of becoming a mechanical engineer. However, back then, in the United States, this type of training was not available to African Americans. So, at the age of 15 his parents sent him to Scotland where he studied mechanical engineering. After graduating school he returned to the United States hoping to get a job. Elijah McCoy was not able to find work in his field because of his race. The only job that was offered to him was that of a locomotive fireman with the Michigan Central Railroad. His job was to shovel coal into the engine and apply oil to the moving parts of the locomotive engine. He needed to do this to keep the engines going. Every time the engine was oiled, the train had to stop moving. Stopping the trains to oil the engines was a big problem. Trips were delayed because of all these stops. Elijah McCoy was very smart. Though he wasn’t performing the job he always dreamt he would have, Elijah McCoy never stopped thinking. He was a trained mechanical engineer who saw the problem and wanted to find a way to fix it. McCoy began to look for solutions in his free time. It took him two years, but he figured it out. Elijah McCoy invented the lubricating cup for steam engines. His invention allowed oil to flow freely onto the engine. The trains did not have to be shut down for oiling anymore. Train trips were now faster since the engines did not have to stop to be oiled. In 1872, Elijah McCoy received a patent for his lubricating device. His lubricating cup became essential to industries throughout the world. Companies that owned this cup were said to have the real McCoy. Piece Count: 24. Ages 3 to 6. Black heritage series.