American Girl Doll – an American dream or a nightmare?

When my daughter was seven, she asked me for an American Girl doll. For most mothers a request for a doll will be a regular occurrence. For me it was like a dream come true (never mind the fact that the only reason she asked was because her best friend got one).

As soon as I found out that I was having a girl I started looking at dolls, dreaming how we will be playing Barbies together (ok, I recognize that I might have some unresolved childhood issues, but who can blame me…). I even bough some fairy dolls to decorate her room. My baby looks like the girliest girl ever, she is cute and dainty, and I dress her up like a real girl. But do you know what her favorite birthday gift was when she turned two – a cement mixer truck. Since she was a baby she has been going ecstatic when she saw screwdrivers and bolts. Best activity for her, when she was a baby, at grandparents’ house was sitting on my father’s lap, and using a tiny screwdriver open and close a battery compartment on a toy. My Little Pet and Calico Critters animals were organized in groups according their size, color and classification. By the time she was two and a half she had a box full of toy cars and the biggest collection of cement mixers in the Eastern United States.

Understandably, when my daughter asked me for an American Girl doll I went: “Oh my god!!!” my baby asked me for a doll. But after a little research in to the topic I went: “OH MY GOD HOW MUCH IT IS!!!!!” Never, did I envisioned, that my dream will cost that much. However, I was not about to deny myself and my child the joy of the doll. In addition, I found out that I can placate my conscience by the fact that several of the dolls in the collection are historical characters and there is a whole library attached to the American Girl experience which makes it extremely educational. So my daughter and I get to play with a doll (yay!!!) and she gets to learn some history – win-win for everyone. Also, very lucky for me, the request for the doll came just before my daughter’s birthday. Being a resourceful parent, I, calmly, and in orderly fashion, mobilized all friends and relatives. In not so uncertain terms I explained the situation and, in my opinion, very politely requested American Girl store gift certificates for the upcoming birthday. Out of desperation, I even did an American Girl store registry, and somewhat obnoxiously put the registration number on the birthday party invitations. I’m happy to report that people came through (occasionally it pays to have a large number of cousins). By the end of the birthday “harvest” we had enough for a doll, a toy pet and an outfit. 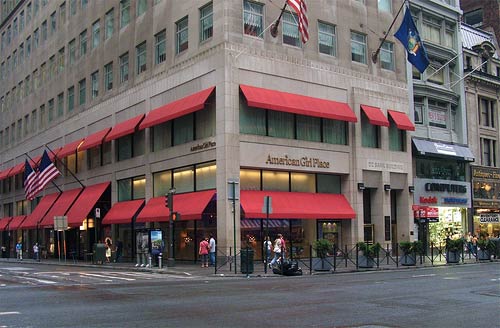 I have to admit that going to the American Girl store in Manhattan is an exciting experience. I went positively giddy at the amount of dolls and doll related stuff there. The historical characters have the era appropriate clothes, furniture and accessories. The only hard thing was to restrain myself on the amount of advice I was giving my child as to what she should pick. Luckily, my daughter has a very strong sense of what she wants. She chose the doll that looks like her, more like a cousin three times removed on the grand uncle’s side, in my opinion, but she was happy, and so was I.

My daughter and Caroline (that’s the name that was chosen for the doll) shared everything; they even slept together for a while. The happy glow lasted for a while and then I realized that we needed a whole bunch of stuff. It turns out, Caroline is very hi-maintenance doll. She required a lot of accessories, such as food, clothing, pets, furniture. But honestly, for the price of toy food in the American Girl store I could feed my family of four for about five days, and some less fortunate families can probably live on for a whole year. Both of my children’s beds cost less than a loft bed for a American Girl doll. But again, resourcefulness and imagination came through: several bags of fancy erasers later, Caroline and a party of six can have a fantastic lunch of hotdogs, burgers, and french-fries, with cupcakes for dessert. Also we are fortunate to have a handy grandpa who can’t say “no” to his granddaughter. Two evenings in grandpa’s garage and a quarter of an old writing desk later, Caroline had a loft bed that is the envy of the entire doll community. I was amazed at what you can do with a little bit imagination, some art supplies, and stuff you can find at a 99-cents store (who could have thought that a beaded napkin ring could be turned in a fashionable set of jewelry for a doll!). Unlike children, dolls are not hard on their clothes, so when you get doll hand-me-downs, it’s like your doll had shopped in an exclusive designer store just for her. And the best part is, not a single doll around has clothes like that.

My daughter is a very pragmatic little individual; she understands the concept of living on a budget. She understood and accepted the fact that we cannot be shopping in the American Girl store all the time. She has a lot of fun creating things for her Caroline and turning non-doll items into doll items. Occasionally she likes to engage in the “what if” game. For example, at the last visit to the American Girl store she said that if she had a million dollars to spend in the store, she would buy Caroline all the horses they had there. I do not know why the doll needs a riding horse, when my own girl refused categorically an offer of a riding lesson.

After over a year of living with Caroline, I can honestly say that we are very happy together. She is less demanding now that she has got her own space, wardrobe, and all accessories that a doll and a girl (and the girl’s mother) can want. The only problem I have now is convincing my daughter that we, and by “we I mean Caroline, do not need a large horse.