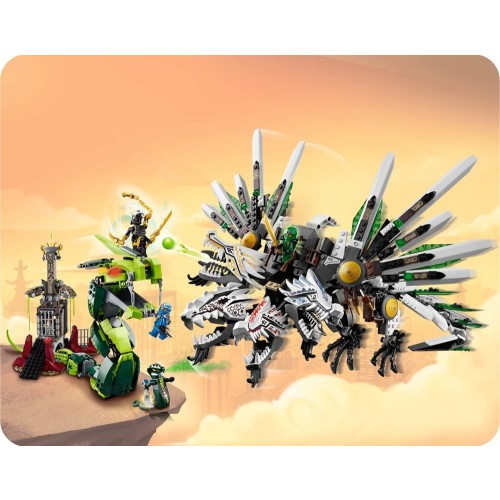 Amazon.com Take part in an epic, ninja-themed battle between good and evil with the LEGO Ninjago Epic Dragon Battle. Inspired by the popular Ninjago TV show, this enormous set transports builders to a world filled with brave ninjas, mythical dragons, and giant serpents. The set includes eight minifigures and several pieces that can’t be found anywhere else, making it an essential choice for any avid LEGO collector. And with over 900 pieces, it provides a healthy challenge for builders of all skill levels.The four-headed Ultra Dragon is the centerpiece of this set. View larger.Includes eight minifigures modeled after some of the show’s most popular characters. View larger.The Great Devourer serpent has snapping jaws and a moveable body. View larger.Cage minifigures in the Serpentine prison. View larger.Enormous LEGO Set with Plenty of Interactive PartsWith over 900 pieces, the Epic Dragon Battle set is one of the largest Ninjago sets ever created. The centerpiece of the set is the Ultra Dragon–a massive, feathered dragon that can launch a green zamor sphere from each of its four heads.The set also contains pieces for the giant Great Devourer serpent, whose snapping jaws and moveable body are more than a match for the Ultra Dragon. Kids can also cage minifigures in the Serpentine prison, which features a hidden snake venom trap.Mythical Setting Encourages Imaginative PlayThe Epic Dragon Battle isn’t any ordinary LEGO set; it has its own narrative that ties in with the Ninjago TV series. The set pits the heroic Ninjago ninjas against the legendary Great Devourer serpent in an epic battle between good and evil.Kids familiar with the Ninjago TV show will especially enjoy role-playing with the eight included minifigures. The minifigures are modeled after some of the show’s most popular characters, including the wise Sensei Wu and the spirited, cheerful Jay.An Enjoyable, Challenging AssemblyBuilding the set is as fun as it is challenging. Parents should be aware that assembling the Epic Dragon Battle requires some degree of finesse: many of the pieces are small and may prove too tricky for little fingers to attach. Younger Ninjago fans might be better off with one of the smaller, simpler Ninjago sets.The set should provide a stimulating experience for older builders. The set’s many pieces give LEGO enthusiasts plenty of room to experiment with their own, custom creations.What’s in the BoxNinjago Epic Dragon Battle pieces (915 total), two instruction booklets, and decals.Epic Dragon Battle At a Glance:Enormous LEGO set with a mythical, ninja-themed settingMassive four-headed dragon measures 20 inches and features many interactive partsGreat Devourer serpent has movable jaws and a bending, movable bodyEight included minifigures are modeled after characters from the Ninjago TV showIncludes all four collectable golden weaponsSimple instructions detail every step of assemblyAge/Weight Requirements:Eight to fourteen yearsLEGO Pieces:915 pieces From the Manufacturer The epic battle of good versus evil has begun. The Great Devourer has been awakened and threatens to devour the world of Ninjago. Can the legendary green ninja, riding the awesome 4-headed Ultra Dragon, overpower this evil adversary? Can Lord Garmadon harness the power of the 4 golden weapons of Spinjitzu to destroy the mighty snake and what about Sensei Wu? Can Jay defeat the evil snake Generals Acidicus, Skalidor and snake soldier Chokun to release his master from the impenetrable snake prison? Only you can decide the outcome of the final battle between good and evil. Includes 7 minifigures: Lloyd ZX, Jay ZX, Sensei Wu, Lord Garmadon, Acidicus, Skalidor and Chokun. Set features 4-headed Ultra Dragon, The Great Devourer, snake prison, Hypnobrai fang blade with blue anti-venom capsule, 4 golden weapons and 7 regular weapons. Weapons include Hypnobrai fang blade with blue anti-venom capsule, all 4 golden Spinjitzu weapons and 7 regular weapons Includes The Great Devourer and snake prison The Great Devourer features flexible body and opening mouth with space for minifigure Snake prison features opening gate and space for minifigure with snake venom trap Ultra Dragon measures over 20 (50cm) long, 14 (35cm) wide and 9 (22cm) tall