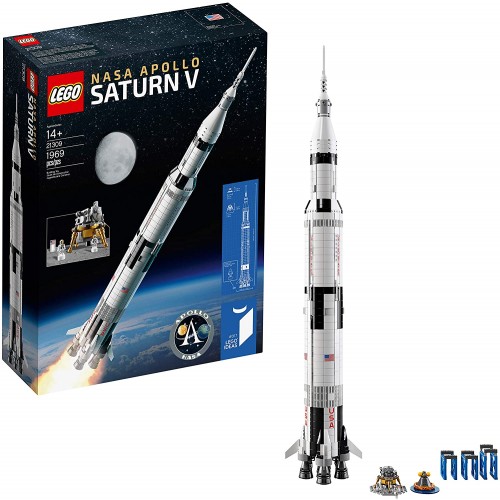 Product Packaging: Frustration-Free Packaging The meter-high LEGO NASA Apollo Saturn V is the perfect model rocket to both display and role play with. Packed with authentic details, it features 3 removable rocket stages (first, s-ii second, and s-ivb third) a launch escape system, a command and service module along with the Lunar Lander and Lunar Orbiter to recreate a rocket launch and splashdown landing. There are also 2 new-for-june-2017 Astronaut minifigures and 1 microfigure for role-play recreations of the Moon landings. This building toy includes an informational booklet about the manned Apollo missions and the fan designers who created this educational LEGO Ideas set. Builders have the option to horizontally display the Saturn V model with the 3 stands. Bring to life the rocket launch that took humans to the moon with the meter-high (approximately 1: 110 scale) model rocket of the NASA Apollo Saturn V. This space toy with astronaut figures lets you role play the many missions the Saturn V completed. The Saturn V rocket kit includes 3 removable rocket stages (first, s-ii second, and s-ivb third) below the launch escape system, command and service module. Plus, there are 2 minifigures to accompany the Lunar Lander and splashdown rocket toy. After building the Saturn V rocket, you can display the spacecraft horizontally with 3 stands. The Lunar Lander docks with the command and service modules while the Lunar Orbiter sends the rocket into space. Recreate space adventures with this NASA toy and action figures based off of the included booklet about the manned Apollo Moon missions and the fan designers of this build and play set This spaceship toy measures over 39-inches (100cm) high and 6-inches (17cm) in diameter. It includes 1,969 pieces and is ideal for boys and girls 14 years or older.