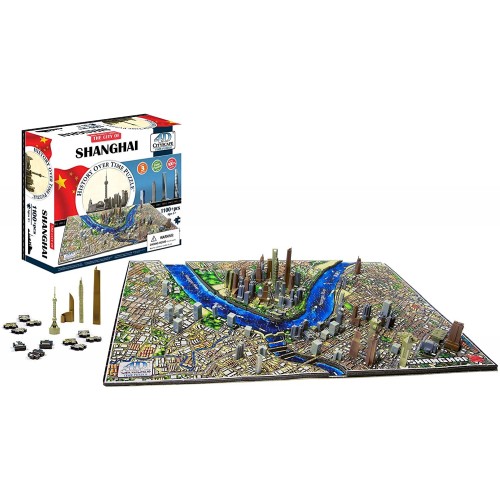 From the Manufacturer This award-winning puzzle recreates Shanghai’s famous skyline, not only in three dimensions using scale-model buildings, but also along the fourth dimension of time, spanning over 100 years of architectural history. The puzzle includes 72 plastic building replicas that depict the city as it appeared as far back as 1893 through to 2013 with the addition of the Bank Mansions and into the future to 2014 with the completion of the Shanghai Tower. The puzzle includes such iconic structures as the World Financial Center, Oriental Pearl Tower, Jin Mao Tower, which allows you to recreate the famous waterline of The Bund. The buildings fit into pre-cut holes in a traditional 2D jigsaw puzzle that form the city’s street layout. The product includes a Time Poster that directs you through time as you rebuild Shanghai’s skyline history. Ages 8+. Assembled 24 L x 16 W x 2 H. 72 plastic building replicas, from 1893 through 2014 Construct the skylines of some of the greatest cities on the planet layer-by-layer, piece-by-piece 4D Cityscape has revolutionized the puzzle market forever with our patented three layer history over time puzzles